I pinpointed a major weakness to my propensity for writing a while back: I am far less likely to engage in it if there is no one to see it (and preferably, see it right away – with comments).

This feeling was very succinctly summed up when I saw the BBC’s Sherlock for the first time (on Netflix) the other day.  Sherlock Holmes was chasing the first “villain” of the series, and was commenting to Dr. Watson how the truly brilliant ones always secretly wanted to be caught.  He remarked:

“That’s the frailty of genius, John.  It needs an audience.”

I’d never thought that anyone had ever had a similar rumination to my often lamentation until that very moment.  So, at least the screenwriter for Sherlock knows with what I’m dealing.  I think I’ll go watch another episode or two, in fact.

But first, here are a couple of things I’ve done lately…

The first is a Banana Bread (Yes, I can cook… well.) with a Streusel Nut topping.  Enjoy the pictures – my mom and I are enjoying the real thing.  😉 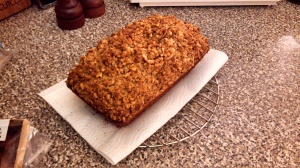 The second is a poem I wrote for myself (half to inspire me to write, half to rebuke me when I neglect to do so)…

Anyway, that’s all for now.  I’m behind in some college work and seriously need to catch up.

OH!  And I wanted to (once again) thank you all for being my audience.
My genius needs you.  ^_^

2 Responses to Genius Needs an Audience